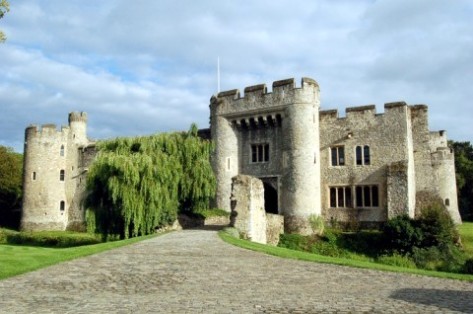 Allington Castle stands beside the River Medway about a mile north of Maidstone. This beautiful, moated castle seems perfect, but the perfection has been contrived in modern times.

Henry II destroyed a Norman castle after the revolt of 1173-74. The low mound immediately southwest of the present castle represents the motte and some herringbone masonry is visible in the curtain facing it. Other than that, Sir Stephen de Penchester, Constable of Dover Castle and Lord Warden of the Cinque Ports built the existing structure. He obtained license to crenellate in 1291 and the original survives.

His castle is characteristic of the Edwardian age but is not uncompromisingly military like the contemporary castles of Wales. In design, it reflects the quadrangular layout that was becoming popular, but the rear bows outwards in a gentle curve and the distribution of towers is quite irregular.

Five D-shaped towers of different sizes project from the curtain, though one or two others existed originally. Solomon’s Tower, at the south corner, is the largest and may be regarded as an early tower house. There is also a gatehouse flanked by simple, half-round turrets; the machicolations above the gateway are modern.

Some ruins of barbican survive on the far side of the moat. The range on the southwest side of th courtyard, known as the Penchester Wing, may incorporate a slightly older manor house. However, once the castle was built, the main apartments stood opposite, centered on a hall that still exists but is largely a reconstruction. Only its fifteenth century porch is authentic.

In 1492, Allington was granted to Sir Henry Wyatt in recognition of his loyalty to Henry VII. He upgraded the castle by building the narrow range which divides the courtyard into two unequal parts. Its upper floor forms a long gallery. The picturesque, half-timbered house within the smaller enclosure also dates from the Wyatt period.

One thought on “Allington Castle”