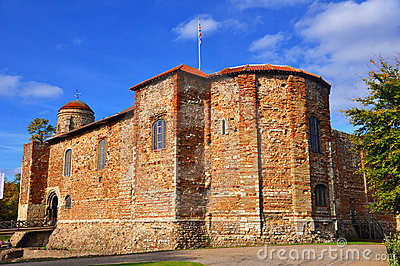 Colchester reached the peak of its importance before the Romans came.  A city for veterans of the Roman army was established here, dominated by a temple of the deified Emperor Claudius.  Queen Boudicca razed it to the ground in AD 61 but a new city soon rose from the ashes.

Colchester Castle, near the center of the walled town, has by far the largest ground area of any keep in England, measuring 150 by 110 feet.  William the Conqueror founded a castle here soon after the Norman Conquest and the keep may have been started following a Danish raid on the town in 1071.  The masonry is certainly early Norman – note for example the herringbone work in the fireplaces.

The keep has affinities with the Tower of London’s White Tower, so much so that the builder of the latter, Bishop Gundulf of Rochester, is often credited with the design.  However, it is possible that a destroyed keep at Rouen provided the model for both.  The chief similarity is the apsidal projection at the south end of the east wall.  In some respects the Colchester keep is quite different; it is much more rectangular in plan, there are projecting towers rather than mere buttresses at the corners and the keep was originally divided by two cross-walls, so that the eastern half contained two curiously long and narrow apartments.

Only the eastern cross wall still stands.  The apse shows where a chapel was intended, but the keep now appears peculiarly squat in relation to its area because only the two lower floors survive.  Traces of walled-up battlements reveal that, when only one story high, an embattled parapet capped the keep.  This may have been done as an emergency measure in 1083 when a Danish invasion seemed imminent. The next level must have followed soon after.