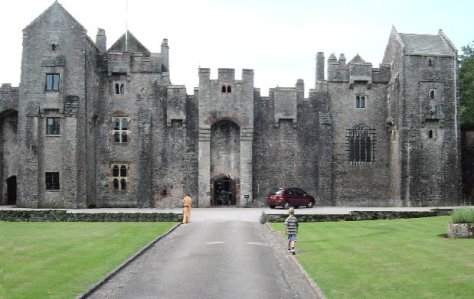 Compton Castle, three miles west of Torquay, has belonged to the Gilbert family – with one long interruption – since the early fourteenth century.  The Gilberts are famous for their role in the age of exploration, Sir Humphrey Gilbert discovering Newfoundland in 1583.  Occupation descended to impoverished tenant farmers who could not afford any fashionable rebuilding, and for this reason the castle is one of the few to survive more or less intact but remarkably unspoiled.

Disregarding its later defenses for a moment, Compton originated as a typical West Country manor house.  It is centered upon a fourteenth-century hall which, having fallen into ruins, was rebuilt on its original lines in 1955.  Otto Gilbert added the west wing containing the solar and a pretty little chapel.  It appears that the tower attached to the solar is older than the others and began as a tower house.

Otto’s son John transformed the house into a more extensive complex.  His additions have been dated at about 1520 and if this is accurate then Compton vies with Thornbury as the last true castle ever raised in England.  At this time, the coast suffered frequent attacks from French pirates and Compton, not far inland, would have been a target.

A new wing containing the kitchen and its domestic offices was added to the east of the hall.  The outer face of this wing, with its projecting towers, is clearly a curtain wall.  It is likely that a quadrangle was intended, the hall lying across the middle and dividing it into two.  If we imagine the scheme brought to completion there would have been square towers at the four corners and others in the middle of the two longer sides.  The older tower is one of these.  However, the west wing was never extended southwards to match the east wing.