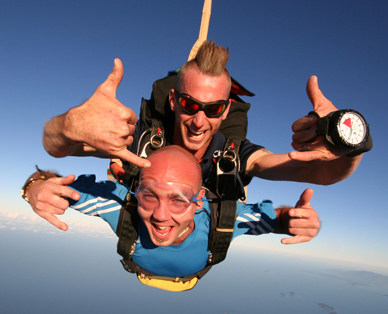 A Guide To Skydiving

Skydiving, as the word implies, is an activity in
which you’ll be literally diving down from the sky
with some safety measures, of course. It’s done from
an airplane or a helicopter which takes off from a
drop zone, which is like a small airbase.

A Bird’s Eye View Of Skydiving

If you’re planning to do this breathtaking activity,
then you should be prepared to know that skydivers
would usually exit their airplane at the height of
4000 metres or 13,000 feet. After doing so, you would
have to do a freefall for a period of time and then
you could open your parachute to slow down your
descent until you reach a safe and slow landing speed.

Generally, the chute should be fully inflated by the
height of around 2,500 ft. In fact it is part of the
law that skydivers should jump with two chutes. One
would be the main chute and the other would be the
reserve, just in case the main parachute would fail.

Once your parachute is in its full inflation, you now
have the ability to control your speed and direction
using your chute’s steering lines. With that,
technical manoeuvres could be executed by experienced
skydivers giving them the ability to land with great
accuracy. In fact, there are even some competitions
held on being able to land in a specific spot with the
most precision and style.

Other than bundling yourself out of the plane, opening
a parachute and floating your way down to Earth,
skydiving also have some specialization areas, and
here are some of them.

During the freefall period of the jump, some
experienced skydivers would combine to create and hold
different formations before they breaking off and open
up their parachutes and float down to earth as normal
skydiving does. In fact, the world record for this
kind of skydiving is actually a 400 man dive. The
formation was maintained for 4.25 seconds from the
altitude of 25,000 ft. in Udon Thai, Thailand.

This kind of diving can be a very entertaining one. It
is where the skydiver would perform some acrobatic
manoeuvres and stunts, such as rolls, tumbles and
graceful formations by himself throughout the freefall
period and before he opens his parachute. Freestyle
dives would also need the participation of another
skydiver.

The second diver on the other hand would not do any
kind of stunts. However, he would be the one to film
his partners’ performance through a camera that is
mounted on his helmet. This kind of dive is actually a
registered competitive sport that was declared in 1996
by the FAI.

Free Flying: Do It Your Way

This is considered to be the art of controlling your
body and having the ability to move through different
static positions while you are in the freefall period
of your jump, before you open your parachute. If
you’ll be doing dives like this, you would have to do
some manoeuvres like Sit Flying, Back Flying, and Head
Down. These would allow you to have more control on
your speed and trajectory. You also have to do some
exit rolls or tumbles at the end of your freefall
stage so that you can safely deploy your parachute by
the time you reach the right altitude.

One thought on “A Guide To Skydiving”