She was raised under harsh slave conditions in Dorchester County, Maryland; she was subjected to whippings even as a small child. When Harriet was twelve years old, a white overseer struck her in the head with a weight. Harriet would suffer lifelong blackouts from that injury and, like most slaves, was motivated to escape for freedom.
While still enslaved in Maryland, Harriet married a free black man named John Tubman.

Although marriage did not change her status as a slave, she was permitted to spend time with John after work hours. The couple did not see eye-to-eye on the question of escape from Maryland. John threatened to report any escape attempt that Harriet made. One night in 1849, the night before an auction might send her South, Harriet decided to flee. A white neighbor assisted Harriet by providing a list of homes that would shelter her en route to Pennsylvania, a free state. During her trip north, she became acquainted with William Still, the Philadelphia Stationmaster for the Underground Railroad. Soon she too became a “conductor” who networked with John Brown, Frederick Douglass, and other abolitionists. These men held her in high esteem. They would name her among the bravest people on the continent, and Brown insisted on calling her General Tubman.

The Fugitive Slave Law was passed in 1850. This included hefty fines for aiding escaped slaves, and rewards for their capture. People became bounty hunters, searching ever more fervently for escaped slaves and their supporters. Therefore, Harriet started relocating her family members to Ontario, Canada, instead of the northern US. First she brought her sister and her sister’s children to freedom in a log canoe. Next she rescued her brother and two other men. When she returned for John Tubman, she found he’d remarried!
Harriet found others who wished to join her and continued the journey. Later, an especially hazardous journey involved rescuing her aged parents in a makeshift buggy.
Altogether, it’s believed that Tubman made 19 trips to Maryland and brought about 300 people to the North! People called her the “Moses of her people” for delivering slaves to freedom. She was known for her bravery and determination; if anyone became frightened and wanted to turn back, she threatened to shoot them! She’d explain, “A live runaway could do great harm by going back, but a dead one could tell no secrets.” As she proudly told Douglass, she never lost a passenger. This was despite her increasing fame and appearance on wanted posters.

Harriet took many precautions to reach this level of success. For example, if a baby was being transported, she carried sedatives to keep it quiet. She would start a trip North on Saturday, since reports of fugitive slaves wouldn’t be published until Monday. Harriet was also a master of disguise; sometimes people she knew didn’t even recognize her!During the Civil War, Harriet became a spy for the Union army. Later she worked in Washington, D.C. as a government nurse. Still, for over thirty years she didn’t receive a government pension. (Eventually they paid her $20 per month.) She lived very simply and was grateful when Sarah Bradford published her biography and shared the profits.When the Civil War ended, Harriet married a soldier, Nelson Davis, who was ten years her junior. They built a home in Auburn, New York and lived happily together until he passed away almost 20 years later. 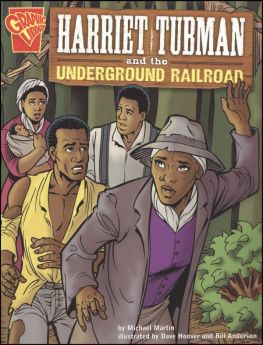 Harriet remained active in Auburn. The town was close to Seneca Falls, where Susan B. Anthony was organizing for women’s rights, and Harriet helped Auburn become a similar center of feminist support. She also purchased land with the hope of building a home for elderly black people in need of assistance. She was unable to raise the funds though and gave the land to Auburn’s Methodist Episcopal Zion Church. When the church completed the home in 1908, Harriet was invited to move in. She lived there until 1913, telling Underground Railroad stories to visitors, until she died of pneumonia at age 93. Harriet Tubman was buried in Auburn with military honors.