New business models driven by AI and ML disrupt work as we know it, but not where we would expect it!

The notion that technological innovation destroys jobs is a reoccurring phenomenon in human history. There is a caricature by Honoré Daumier from the peak of the industrial revolution in the 19th century that shows sour-faced horse cab drivers watching steam locomotives pulling cars full of passengers. As we know today, the cab driver’s fears were unfounded. With more effective transport and more efficient division of labor came economic growth, and with it came an increase of individual wealth – which was good for the horse carriage business.

Quite likely the industrial revolution in the late 18th early 19th century was not the first time that disruptive innovation triggered concerns about the future viability of certain skillsets. 4,000 years before the invention of the steam engine, it was probably with similar dread that stone age flint knappers looked at the shiny, mass-produced bronze tools of their metal founding peers.

And with the inexorable march of artificial intelligence (AI) and machine learning (ML), humankind has, once again, arrived at a similar point in history. Concerns that algorithms, programs, and robots replace jobs spread with alarming figures quoted in the media to support this perception.

Yet if we look closer, we find that the digital transformation’s disruptions might not occur where we would expect. Amazon Go is a textbook example. The e-commerce giant’s brick and mortar store concept replaces the need for checkout staff. Unlike similar convenient stores, it has no human cashiers. The stores use computer vision, sensors, and AI-based deep learning. A doomsday scenario for retail workers, as Forbes pointed out, quoting a figure of 2.3 million retail workers in the U.S. alone that could lose their jobs if the Amazon model would catch on. 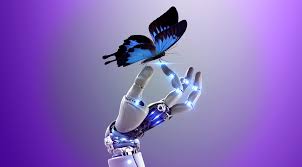 The opposite is true. In fact, Amazon Go needs more employees than any other convenience store. Chains like 7-Eleven staff their smaller stores with a team of one to three workers per shift. Amazon Go needs seven to ten: four to prepare the fresh food for takeaway dishes, two employees to refill the shelves and one to man the turnstile. The staff running the back office, driving technology development and doing maintenance come on top. Here as well, Amazon’s staffing requirements are higher compared to your regular 7-Eleven.

Whether you like it or not, work will not end in the digital age. We better prepare.

However, disruption does not come without change. New jobs and functions will replace old ones, and there will be a massive shift in the demand for new skillsets. This is the real challenge we’re facing. Already today in Germany alone, there is a shortage of 95,000 professionals with data science and data analytics skills. For all of Europe, the skills gap in the information and communications technology (ICT) sector is expected to reach 500,000 by 2020.

As of today, our education systems don’t sufficiently address the challenge of lack of digital skillsets. Most schools still see digital skills as a supplementary proficiency. We must recognize digital literacy as an elemental qualification. Just like numeracy and literacy, digital literacy will be foundational to successful living, learning and participating in future society.

Strong digital proficiency in today’s workforce means much more than internet browsing. Ability to retrieve and access information is not enough. Essential digital skills for 21st-century learners could include managing devices and apps, awareness of privacy & security and a basic understanding of coding. These should be considered and become a component of curriculums in primary schools.

There are many ways to convey these skills; one example is micro bit: a tiny programmable computer that uses a visual programming language designed to turn coding into a means for children to express themselves – like writing, singing, dancing, and painting. The learn and play computer uses sensors and interfaces developed by NXP, and its quick-to-learn coding editor enables children to create completely functional programs in minutes. In the process, they obtain the knowledge to succeed in the digital age and to drive innovation in a changing world.

Future generations will find a work environment in which people will interact ever more closely with machines. One, where computational thinking will not be perceived as an additional qualification but as a basic requirement. Developing and implementing a digital transformation strategy that seizes the tremendous opportunities of the digital age requires a societal effort and cannot be tackled by one actor alone. Complementary to the efforts of governments and politics, strengthening collaboration among the industry, academic research, and society, to develop a holistic approach is essential. Not only to advance the creation of entirely new jobs that today we can’t even think of, but also to have a broad base of digitally skilled talents to fill these positions.

The pace of change will continue to accelerate throughout modern societies. The only constant will be agile, talented people, who can adapt to that change. Whether you like it or not, work will not end in the digital age. We better prepare.