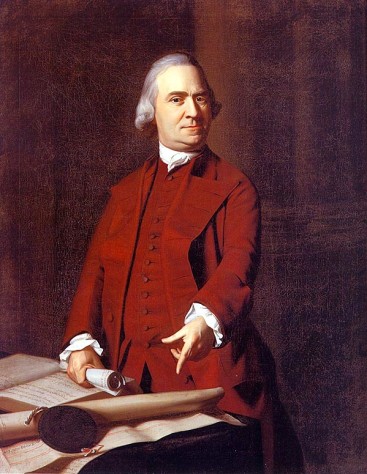 Who Was Samuel Adams?

Today, the name Sam Adams is associated with the Boston Beer Company. How did a statesman’s name become attached to lager, and how did the real Sam Adams become famous?

Actually, the Sam Adams recipe wasn’t developed until long after Samuel Adams’ lifetime. A Missouri brewer named Louis Koch developed the formula in 1860. Until Prohibition, the brew was marketed as Louis Koch Lager. The brand returned to store shelves after Prohibition, but a new name was eventually given in 1985. That year, on Patriot’s Day, the beer was entered into the Great American Beer Festival. The name “Sam Adams” was fitting for the festival’s recreation of a revolutionary war scene, and the lager soared in popularity.

Samuel Adams was born to a brewing family in Colonial America. He was raised in Boston and had long been concerned with fairness and justice in government. Decades before Thomas Jefferson drafted the Declaration of Independence in 1776, Adams penned a school paper that developed similar ideas about freedom; he’d been studying the theories of John Locke while at Harvard College.

In the 1740s, when Adams returned to Boston to work for his father, the two men encountered problems with the British government. The Governor of Massachusetts, who was appointed by the Crown, fought the Adams family for their home and land. Sufficiently fired up, Samuel became a populist leader. He served as a clerk in the colonial legislature, and when not at work he put his education and energy to use convincing other colonists of their right to fair representation. He presented these ideas at democratic town meetings and sometimes led discussions over pints of lager at Boston taverns. His followers became the Country Party.

Of course, it was tea and not beer that instigated Adams’ most famous activity. The Country Party became more active throughout the 1760s and 1770s as the British government imposed additional taxes on the colonists. In 1773, they formed a subgroup – the militant “Sons of Liberty” — and planned a resistance known as the Boston Tea Party.

The colonists objected to the British government’s arrangement with the East India Company. The government would now permit the East India Company to supply tea to retailers directly. This made tea more expensive by tightening controls on tea smuggling, establishing the company’s tea monopoly, and eliminating colonial wholesalers. Samuel called upon the Sons of Liberty. One December night in 1773, they disguised themselves as members of the Mohawk tribe and boarded several docked tea ships. They overturned the incoming tea shipment right into the Boston harbor. This famous “Boston Tea Party” ensured that colonists would not pay a tea tax!

Samuel wanted to expand his work for colonial justice beyond his hometown. In 1774 he brought his case for independence to his cousin, John Adams, and a wealthy merchant named John Hancock. With their assistance, Samuel convened the Continental Congress, a meeting for representatives of various colonies to discuss their problems with the British Parliament. Two years later, the Continental Congress met again to adopt the Declaration of Independence. Samuel signed the document on July 4, 1776.

Following this accomplishment and the ensuing war, Adams served in the Massachusetts State Senate. He then held the post of Lieutenant Governor of Massachusetts until 1793, and he was elected Governor of the state in 1794. Adams passed away in Boston at the age of 83, leaving a lifetime of freedom fights as his legacy.

Samuel Adam’s strong belief in independence and his ability to rally support for freedom earned him the nickname “Father of the American Revolution”. It’s no wonder his name was lent to a Boston beer on Patriot’s Day. Cheers!