Procrastination: we’re all guilty of it. Sometimes you spend more time coming up with excuses to postpone a task than it would take to actually complete it. Why is procrastination so prevalent? Unfortunately, there are several reasons we delay our tasks. But, believe it or not, it doesn’t have to be that way. For every reason for procrastinating, there is a strategy for getting back on track.

Problem: You’re more focused on the present than future.

I’ve often had the thought, “That’s Future Hannah’s problem” as if my future self is a separate person. That’s the attitude of a procrastinator. While there is something to be said for living in the present, we also need to consider how our current actions will affect our futures.

Solution: Think in terms of days rather than months or years.

We procrastinate because we want an immediate benefit. So to trick our minds into seeing the benefits of long-term plans, we have to make it feel as if the reward is close. A study published in Psychological Science found that if we want the future to motivate us into taking action, it has to feel as if it is approaching quickly.

We can do this by changing what units of time we think in. For instance, they found people planned to begin saving four times earlier for retirement when they thought in terms of 10,950 days instead of 30 years. Next time you’re delaying buying Christmas presents, remember that you only have 14 days and not two weeks.

Sometimes we aren’t procrastinating a task because we’re dreading it, but more because it isn’t calling attention to itself as strongly as our distractions. The buzz of a text message or Facebook notification promises it will only take a second to look at, but it somehow launches a long conversation or plunges us into internet stalking an ex.

When you need to accomplish a goal, create a distraction-free environment. Silence your phone and put it in another room. Use an app that temporarily blocks social media sites and anything else you check frequently. Your cryptocurrency of choice isn’t going to rise or fall like crazy while you work.

Research has shown a connection between procrastination and impulsiveness. If our favorite websites aren’t easily accessible, we can avoid the urge to check them. Make your distractions more difficult to do impulsively and you might not do them at all.

Focusing your attention on day-to-day activities is easy. When you have plenty of projects that completing today would immediately make your life easier, why prioritize a task that doesn’t need to be finished for another month? Well, because in 29 days, you’ll have a month’s amount of work to accomplish in a day. Or, worse, it’ll never get done at all.

Solution: Look at the big picture.

According to a study published in the Journal of Personality and Social Psychology, “primary interests, compared with secondary interests, carry more weight in distant future than in near future decisions.” In layman’s terms: Look at the big picture. 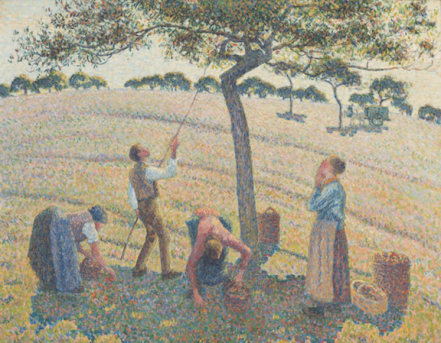 Pointillism paintings are made of many tiny dots. If you look too closely at the details of the photo, it’s overwhelming. Backing up allows you to see the big picture. — Apple Harvest by Camille Pissarro

They give the example of a choice between an unexciting job with fascinating training and one whose training is uninteresting, but you know the actual job would be exciting. Overall, you know to base your decision on the long-term position and not the short-term training.

Consider how your activity choices factor into your overall life goals. Step back from the details of daily life and look at your life as a whole. In the big picture, how is your procrastination affecting the significant accomplishments you wish to make?

Problem: You have a fear of failure.

Sometimes we would prefer to do nothing than risk trying an activity and failing. If a high school student avoids applying to a college, they can’t get rejected from it. If you don’t attempt that new workout, you won’t find that it’s too challenging for you. Some people suffer from “analysis paralysis” where you overthink possible outcomes so much that you never take action. Don’t let the chance of failure deter you from something you could succeed at.

Research has shown we’re more likely to put off a task the more critical that task seems. In one study, a group of students was told the math test they were about the take would be a great indicator of their abilities. They procrastinated preparing so they would have an excuse if they didn’t do well.

The other group was told that the test was just for fun. With the threat eliminated, they did a lot of preparation to do well. Remember that every task you do doesn’t need to define you. Remind yourself that, in most cases, the worst case scenario isn’t too bad. Don’t procrastinate. Be proactive.

Problem: You think you work better under pressure.

“The idea that people perform better under pressure is a myth.”

He’s conducted a series of studies, with the use of pagers, on how people feel when they’re procrastinating. Throughout the week, participants would be paged and asked their mood as well as if there were something they should be doing.

When confronted about tasks they should be working on, people would often respond they’ll “feel more like doing it tomorrow” or “I work better under pressure.” However, once the pressure hit, people admitted they didn’t enjoy working that way. Wanting pressure is no excuse for procrastination.

Start by visualizing that you are taking action. Choose a task you’re likely to procrastinate. Imagine you are taking the first steps to complete it and everything is going well. When you are feeling confident in your ability to complete the activity, actually move into action.

Hello , we are gonna move to another hosting soon, and we are afraid to lose the contact that we maintain all this years with our wordpress followers, so we will appreciate if you can leave your data (Name and Email) in the next Form in order to continue sharing with you our content.

Or you can enter your data in the next link . Contact Form.